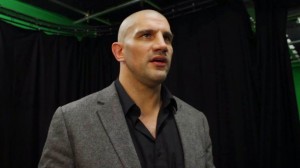 He was soft spoken and thoughtful in his replies, self deprecating when expounding on why he was wearing a T-shirt that said Fight For The Forgotten, a charity founded by fellow fighter Justin Wren, and how much learning about the disadvantages faced by others a continent away touched him.

What new match ups in Bellator’s heavyweight division are you hoping to see?

JT: Obviously I got Kimbo [Kevin ‘Kimbo Slice’ Ferguson], we’ve got history. I want to fight Kimbo, we’ve got some unfinished business there. I’m waiting to see what happens with the heavyweight title, see what’s happening with [Vitaly] Minakov.

No one really knows what’s happening with him, when he’s coming back. Are they going to put a tournament on? Everyone is on tenterhooks waiting.

I’ve got a big fight coming up Friday. I’ve got to get that sorted and I’ll be looking for Kimbo after.

Fighting is a very selfish sport, it has to be all consuming. It takes everything you have.”- James Thompson

Would you be willing to participate in a heavyweight tournament?

JT: Yeah! I’m willing to do anything, I’m here to get the title. I’m not afraid to fight anyone. It’s just a case of seeing how the land lays and how I can fit into that.

I’m going to do my best. It all comes down to winning fights at the end of the day. There’s no kind of massive science. So I need to win this fight to start it off.

JT: An entertaining win is always good. When I was going through a terrible streak of losses in my career I was still getting calls, still getting paid decent money to fight, because I’m entertaining. And because I go out there to fight and I give it 110%. Whatever you want to say about me, can’t say that [it’s boring].

Like I say, even through my darkest periods, I’ve still been able to get fights and still been about. Now it been a while and it’s been great. I don’t want to sound too blowhard about it, but that kind of goes with the way I fight. I always want to win entertainingly, give the fans what they want.

JT: (Laughing) Sometimes. If it’s a simple win I’ll take that as well.

You’re wearing a Fight For The Forgotten shirt, what is that to you?

JT: It’s for Justin Wren who wrote a book about the Pygmies in the Congo. He went over there to help and saw they’re in desperate need. I read his book and it really touched me, it really made me think a lot.

When I read the book and talked to Justin and seen what he actually went through, the difference he made for the Pygmies in the Congo, it puts your difficulties, your worries throughout the day, into perspective.

You really see that you haven’t got room to feel sorry for yourself or any of that sort. I wanted to do a little bit. Wear the T-shirt and get some people like you to ask me questions, report about it, (laughingly shakes a fist in the air as a rallying sign). Lets make the world a better place!

Is that the extent of it? Basically doing promotion for Fight For The Forgotten?

JT: Yeah for the moment. I want to do- gosh this is going to sound like I’m an American beauty queen. (Pantomimes posing for the camera) I want world peace! That is my goal!

Fighting is a very selfish sport, it has to be all consuming. It takes everything you have. Now that I’m getting older and I see someone like Justin, who is also doing MMA and who is also fighting, I see what he’s done by making a difference. It’s inspired me to think about what I can do.

That’s the powerful thing about it, isn’t it? Him writing his book and inspiring people [with] the actions he’s done. If I can lend to that a little bit, great. And then who knows what the future holds with those kinds of things. It’s a pleasure.

James ‘The Colossus’ Thompson will compete against Bobby Lashley in the main event of Bellator Vengeance on November 6, 2015 at the Scott Trade Arena in St. Louis Missouri. The card will also air live on Spike TV. Please follow James on Facebook and Twitter.

For more information, or how to help Fight For The Forgotten, check out their website. The previously mentioned book can be purchased here.