If you’re a fight fan it might seem that you’ve heard the name Jorge Masvidal for ages; it’s simply because you have, he’s been around since his teenage years. Jorge started his fight career in the streets with the likes of Kevin ‘Kimbo Slice’ Ferguson, the one-time YouTube sensation, getting paid to fight whoever was willing in unsanctioned combat.

In the spring of 2009 Masvidal entered Bellator’s Lightweight Tournament, winning his first fight by knockout in the first round. Masvidal made it to the semi-finals before succumbing to an inverted triangle choke from Toby Imada.

Masvidal remained in the lightweight division during the acquisition of Strikeforce by The Ultimate Fighting Championship (UFC). After a period of inactivity due to injury, by both Jorge and his scheduled opponents, the UFC booked Masvidal to face former UFC Champion Benson Henderson in a lightweight fight at UFC Fight Night on April 4th, 2015.

The fight fell apart when Henderson was pulled from the bout in order to replace an injured fighter in the main event of the evening. Masvidal accepted Al Iaquinta as a replacement opponent and remained on the card.

Jorge would lose that fight by decision, a decision that was highly criticized by mixed martial arts media outlets and fans alike. This would be the last lightweight fight of Masvidal’s career.

JM: I’m going to give up size and strength to a couple of guys, but fuck it.  I wanted to move up after the James Krause fight in Las Vegas.

Do you have any regrets going up to welterweight (170lbs) from lightweight (155lbs)?  There were some fighters you didn’t get along with at 155lbs or that you were campaigning to fight.

Unless they come up a weight class after the IV ban, its pretty much a wrap. For example, Bobby Green; you’d never be able to fight him. Would you ever cut down again for a grudge match?

JM: Shit, I don’t dislike Bobby that much (laughing). Hell  no! Cut all that weight? But if Bobby wanted to meet me at 165lbs or 160lbs, I’d definitely cut down for that and we’d have some fun.

Is your goal to put on an exciting fight, get bonuses,  and get paid; or are you looking for a championship run?

JM: I won’t ever sleep right at night if I retired without ever  having a belt around my waist. I literally started from the bottom, with street fighting, and I’ve done a lot through the years. I’m just going to get better.

I know it’s just a matter of time for that belt around my waist. My will has never been broken. I’ve lost fights [by judges decision]; but most people think I’ve won those fights. It’s just a matter of fixing a couple more things here and there, that’s it. Going out there and competing.

JM: Maybe my dieting. [For this fight] I went out to Oregon State University with my boy Colby Covington. We wrestled like 4 or 5 times a week, [we did]  our own stand up and shit.

I’m really excited about that. That’s the type of shit that makes training fun again. I’m a huge fan of collegiate wrestling. That’s the only thing I watch whenever it’s on. I watch it more than most other sports.

So facing wrestlers is not a problem for you?

“This is what I was meant to do. I love this shit.”- Jorge Masvidal

Your UFC debut at welterweight was surprising to a lot of people. What I could gather, from fans and media, is the reason people weren’t excited to see you fight previously,  was because your fights were going to decisions. People didn’t expect anything flashy in your fight with Cezar Ferreira,  nonetheless a knockout from elbows and strikes. It was considered Strikeforce Masvidal.

JM: One thing I definitely want to do is finish. I can fight aggressive, I fight counter styles, I can wrestle people down. I can do a lot of different things.

I don’t know if, in my next fights, I’ll submit them or finish them with strikes; but I definitely want to set myself as [far] apart as I can from the competition. I just want to beat the crap out of people, ya know?

I’d like to see Donald Cerrone vs Jorge Masvidal at welterweight.

JM: That is going to happen! Right before the Cezar fight I saw Donald at the concession. Donald’s mad cool, he came up to me, “Whats up, whats up. Hey, we still gotta do this man.”

I told him I’m at welterweight and he was thinking about it, then he said, “Yeah I’d go up to 70 too.” So yeah, we gotta give the fans that fight one day.

Why do you want that fight or the Matt Brown fight? What makes you go out of your way to call them out in interviews and on social media?

JM: They come forward, they throw a lot of strikes, and they fight. I think I can beat them both. I can take a better shot and give a better shot than [either] of them.

That’s why I want to fight them. To prove it to the world. Show the world that I’m a fucking stud. This is what I was meant to do. I love this shit. I’m having fun, fighting is what I like to do.

I look at it like a basketball game. You know how some can be competitive about a basketball game?  It’s not personal. That’s how I am about a fight. These dudes have to pump themselves up, I hate so and so!, or that type of shit. Fuck all that.

It’s just business and having fun to me. If you like to fight you’re going to have fun doing it, if not? Those are the ones who fade out.

Earlier you mentioned how you started off street fighting, some of those fights are still available online, as well as the documentary you did, Tales from the Grind. The documentary showed the time in your life when you were a single, professional fighter. It was quite a while ago, what has changed in your personal life since then?

JM: (Laughing) A couple of different things have changed. I was never a going out or club type of person. I hate clubs.

Did you go a lot when you were younger and became burned out on the club scene?

JM: Miami has a tremendous amount of the night scene, if you’re not dedicated and disciplined the night life will ruin you here. You can party until 10 o’clock in the morning the next day. What the fuck type of training can you do if you’re doing that? A lot of people get caught up in that shit.

That sounds like a good time. How were you meeting women back then? Through friends of friends? 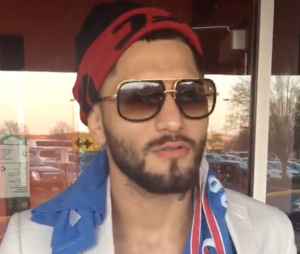 “I’m a talker. I’ve always been a go-getter. If I saw something I liked, I’d go up to her, introduce myself. My dad showed me how to talk to girls.”-Jorge Masvidal

Are you and your dad still close?

JM: Super. He just got out of jail recently and he lives with me. He’s my best friend; we were always close even when he was in the penitentiary. But, obviously, we’re a lot closer now.

How long was your father in for?

So from when you were 4 years old until you were 22 he was gone?

JM: He wasn’t gone out of my life though. At the beginning my mom didn’t want me to know the [truth] so she made up a crazy story about my dad. She didn’t want me seeing my dad in jail.

Me and my mom were dirt poor, it was fried eggs and rice every fucking day. I used to have hatred for my dad until I found out he was in jail. When I turned 12 years old they finally told me the truth about where my dad was. Then it all made sense. I used to have this sour relationship with him because he wasn’t there, but he always called me.

He would be real slick about it before I knew. He’d always call one of my aunts so they would hear, “This call is from the penitentiary.” They [my aunts] would three way me on the phone. Tell me that my dad was calling me from Germany. I’d think to myself, if he’s in Germany he’s got to have money, man. I’d be real sour. Then to find out it wasn’t even his fault.

After that I would go visit him every month, sometimes every week. There was nothing he could do [about his situation]. He would still send me money from the penitentiary. He’s the best dad ever; it was just the circumstances of life that didn’t let him be there.

Your dad was in on the fake cover story as well. Do you think he went along with it because he was ashamed? Was it a pride thing for him?

JM: I don’t think it was like that. Maybe. I don’t know. I don’t know if he would say that even if he was ashamed. But I think, mainly, he probably just went along with my mom and thought it was better for me not to know. They probably thought if I knew when I was younger, I would’ve thought the criminal life was the way to go.

Did you tell your father about your street fighting? How did he feel about it?

JM: He knew. He knew before I [did] that I wanted to fight. My father says that when I was 4 years old I used to get kicked out of daycare for fighting. I don’t remember any of the stories but he says that I was doing karate moves from tv on the kids. He says I was 2 or 3 years old watching boxing and I’d go to daycare and be boxing up kids.

What about your daughter? Is she displaying any fight interest?

JM: My daughter? Yeah. Big time, definitely. She’s my clone, she’s like 90 percent me. When I take her to sports I can see she’s athletic. Her mom is too. I wouldn’t force them into any sport, but I want them to.

I think sports help you in life, especially when [the kids] are coming up. You don’t want them having that much free time where all they’re doing is Instagraming shit all day. Sports require discipline. It builds character.

Jorge was originally scheduled to fight Dong Hyun Kim at UFC Fight Night in Seoul, South Korea but has agreed to replace an injured Thiago Alves in the main event.

Masvidal will now face Benson Henderson (who I originally suggested he fight several months ago), on November 28th, 2015. The fight will be broadcast exclusively on UFC Fight Pass.