Tales From My Vagina: The Nutcracker 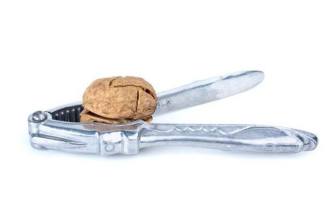 The last month or so I’ve been regularly sleeping with a married man. We’ve known each other for years and its perfect. A ton of wild, kinky sex that we both desperately need.

Today he had a break in his work schedule and decided to stop by for some afternoon delight. I’m an extrmely oral person and unlike most girls LOVE giving head and am quite gifted at it.

Lately he’s very much enjoyed the sensation of sucking for extended periods of time on his balls. Not a problem, I’m happy to oblige. I started working my magic. Since he’s so appreciative I attempted the Two Balled Bitch technique.

Opened my Kewpie Doll lips as far as possible and sucked both very nice, very soft, very delicious balls into my mouth at the same time. Tongue swirl combined with a deep throat suck.

He whimpered and yanked his balls out of my mouth. Thinking that the pleasure was too intense for him, I looked up with a smirk. The Two Balled Bitch isn’t for the novice pleasure seeker and should only be attempted by the truly gifted. But he’s cupping his testicles and his face looked pained.

He told me that I hurt him. Puzzled and a little offended I asked, ‘What hurt, exactly?“ He just shook his head and put his cock back in my mouth. Only cock. No balls.

After another half hour things got heavier and we started to fuck. It felt good to me, but I thought to myself he could go so much harder than this. Something was wrong.

I’ve learned the last thing you want to do is insult a man in bed you actually want to fuck again, so I kept my mouth shut. Not long after that, I noticed the grimace of pain on his face was getting worse.

He went soft. Not completey soft, but enough where something had to be said. I shifted my position and in the sweetest, most concerned voice I could muster asked if he was okay. He’d grabbed his balls and was cupping them in pain.

About two minutes and some very concerning grunts later, my face and tits got sprayed and he almost shouted with pain. Curled in the fetal position at the foot of my bed, cupping his jewels.

I told him how horrible I felt if I hurt him. Being a good hostess, I offered him some ice for his balls. He opted for cold water instead and got into the shower. I cleaned myself up and checked on him.

He was standing there, cradling himself, with the cold water coming down around him. I’m still mentally reviewing my ball sucking technique. This is not a good interlude.

Did I ruin his chances of having kids? Is medical treatment needed? Should I even offer some type of testicle aftercare? How to explain the Two Balled Bitch suck to a doctor? Hell, how to explain it to a WIFE??!

He assured me that I just might’ve suctioned a vein or blew a main blood vessell. I’ve never heard of any such thing. They’re his balls, if says they’re okay; they must be okay. But, my Two Balled Bitch double suck and swish technique might require further testing.

This entry was posted on December 20, 2015 by Melinda Evette in The Tales and tagged Dating, Humor, Sex, Tales From My Vagina, TFMV, The Tales.

$100.00 gift card giveaway! Follow @buttahbabyhair, Like their giveaway post, and tag a friend. Enter as often as you like.
Welp. Ain’t me. Mine is, “I ain’t never tried to get no mother fucker who ain’t tried to get me.” Unknown convict.