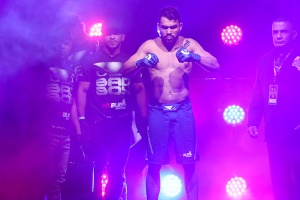 It’s been a long road to a title fight for Patricky Freire in Bellator MMA. Trudging through the early tournament days, facing Michael Chandler in the finals of the lightweight tournament.

Chandler eventually defeated Alvarez to become champion, setting in motion a series of title defenses and challenges with Alvarez, and later, with Will Brooks.

But even after losing lightweight title defenses and challenge matches, Chandler was never far from Bellator giving him another chance at the title — often in an immediate rematch.

I remember that each round was pretty much starting off equal and then I would get kicked in the nuts. – Patricky Freire

After the loss to Chandler in 2011, Freire knocked out Kurt Pellegrino in his next bout. From there it was a down hill trail. He went on a three-fight losing streak that covered all of 2012 and into November of 2013. It was understandable that this fighter who had only been in the promotion since 2011 would need some dominant wins to get back into title contention. So Patricky gave it to them.

The year of 2013 bore witness to Freire obtaining a unanimous decision win over Edson Berto. Coming off that win, 2014 looked promising for Freire, as in his next fight he scored a knockout of David Rickels in Rickels’ hometown of Wichita, Kansas.

That was quickly followed by a technical knockout of Derek Campos in April. At that point, Patricky began to publicly talk about being a title contender, making it known that he was ready to challenge.

In September of 2014 , Freire faced fellow title contender Marcin Held, and had his momentum halted by the judges. In a unanimous decision, Held was declared the winner of the fight. With that, the title rumblings Freire had been able to generate in nearly twelve months of domination were silenced.

Bellator was going through its own struggles at the time. The promotion decided upon new leadership and a new direction. President and Bellator MMA founder Bjorn Rebney was out, replaced by a MMA promotional old-timer in Scott Coker.

Gone also was the Bellator staple of determining title challengers by hosting divisional tournaments, although Rebney’s Bellator didn’t always honor what it touted as the clear path to a championship. Multiple tournament winners in different divisions were often pushed aside to make what the promotion deemed a more popular or relevant match.

Eddie Alvarez, who lost the lightweight title to Chandler, was able to secure a rematch after two wins – knockouts of Patricky Freire and Shinya Aoki – without talk of winning a tournament first.

While Alvarez and Chandler would go on to a drama-filled path to rematches that included a bout cancellation, due to an Alvarez injury, and legal contractual disputes between Alvarez and Bellator, Patricky Freire went about the business of gaining wins. He defeated — and talked trash to — Saad Awad, who fell via unanimous decision.

A decision loss to Derek Anderson interrupted his attempt at a winning streak. That loss was followed by a knockout win over Ryan Couture and then a unanimous decision win over Edimilson Souza.

Every time I started hurting him I got kicked in the nuts again. – Patricky Freire

Bellator mirrored Freire’s struggles, suffering the loss of a high profile bout due to injury. Veteran MMA fighter, and Bellator newbie Josh Thompson, who was scheduled to face Michael Chandler in a non title fight, was out with an undisclosed injury.

Another Bellator versus Fighter public dispute that was resolved when the promotion decided to cut Will Brooks, the most recent Bellator Lightweight champion from it’s roster.

The road to the title has finally come to an end for Freire with an unexpected rematch with Michael Chandler; for a shot at the vacant Bellator Lightweight championship title.

You went from turning down an offer fight Dave Rickles, stating the fight made no sense because you had beaten him previously, to actively volunteering to replace injured fighters at short notice. Why the change, if any, in your attitude?

PF: It’s not that I turned down a fight against him. I asked to fight a different opponent that would get me in line for a title shot. I asked for someone Bellator saw as higher ranked and tougher.

The reason I’m saying I’m available to fight any minute is because I like to be active. Bellator has given me a long time between fights before and it doesn’t benefit me in the slightest, not financially and not competitively. I need to fight all the time in order to be at my best.

Does it matter to you possibly winning a belt that was vacated due to Will Brooks being released versus beating the reigning champion?

What matters is the belt. Will Brooks could’ve [fought] me when he was [with] Bellator, he elected not to. So there’s nothing I can do about that. He left the organization, life goes on. I know I would’ve knocked him out anyway.

Michael Chandler was beaten twice by Will Brooks, do you believe this third chance, now that he doesn’t have to face Brooks again, is deserved?

PF: He’s a former champion and is coming from wins, Thomson is hurt, so it’s pretty much what should’ve happened. I believe I was the next in line for the title and Chandler was close to it, so it makes sense.

If it was for [Chandler] to fight Brooks, that would be wrong. He lost twice to him, but as Brooks has left and he’s fighting me for the vacant title it makes sense.

The knockout will be a consequence of the fight. Doesn’t matter if it’s the first round or the last round. – Patricky Freire

Speaking of Brooks, the last time you were in each others vicinity the St Louis police were called due reports of a physical altercation. Brooks accused you and others in your brother Patricio’s camp of jumping him while he was alone.

Bellator president Scott Coker said there was video of the incident and it would be investigated. What happened during that interaction and what did Bellator do, if anything, about it?

PF: I’d like to focus on the [Chandler] fight, that’s in the past. I’ve talked about it a couple of times, he hit me and he paid for it. No one jumped him from behind.

Do you regret that the Brooks fight is out of reach because he is now signed with the Ultimate Fighting Championship (UFC)? Or is he no longer relevant to you as he was stripped of the belt and cut from the roster?

PF: About him losing, I’d love to put my hands on him and beat him up in front of the whole world, but he avoided me like the devil runs from the cross while he was signed with Bellator and then he left.

So to me he’s irrelevant. I know I’d beat him up and he knows it too, which is why he never accepted to fight me. My focus [is] on the fights that can happen.

There was fan criticism after your fight in Turin Italy that your fight was lackluster and unexciting.

It takes both fighters to make an action packed match but reviewing the fight and critiquing yourself, what do you feel that you could have done more of or better?

PF: Maybe I could’ve pressed more and create a finish, but as you said it takes two to fight. My opponent was backing away the whole time. He wouldn’t engage. And I had to adapt to a complete different type of fighter in less than a week. So I’m glad with the victory.

It has been a while [but] he’s pretty much the same old same old though. –Michael Chandler comments on Freire’s skill evolution.

What was the focus during your title challenge camp?

PF: To improve everything. Bring my game to a new level, put everything together and be ready to beat Chandler in every way.

Michael Chandler has stated that you look for the knockout in the first round and if you don’t get it your resolve fades after that.

PF: I’m ready to fight five rounds, I’m not looking to knock [Chandler] out in the first round. The knockout will be a consequence of the fight. Doesn’t matter if it’s the first round or the last round. And I don’t just look for knockouts, I look for submissions too.

What do you remember about your previous fight with Chandler back in 2011?

When we communicated previously you stated that you were also interested in pursuing a title at featherweight. Is that still a goal for you? Do you believe that will be an easier transition and fight to make as the Lightweight champion or more difficult?

PF: Yes, I think about making history. Becoming the champion at two weight classes would be huge. I also look at the challenges and I believe at Featherweight I’d probably be at my best.

I honestly don’t know if it’d be easier to get the fight, as I’ll be the champion and Bellator will probably only accept that if I give up the title, which I do not intend to do. I want to hold both belts at the same time.

A U.S promotion, World Series of Fighting, has an upcoming card that they have booked two fighters that are brothers to fight each other. The fight has no meaning, it’s not a contender’s bout nor a title fight.

Apparently the brothers have a contentious relationship but train at the same gym and one brother often acts as corner man to the other. I personally feel this fight is morally repugnant and exploitative.

Being so close to your brother, and fellow fighter Patricio, how do you feel about matches like these?

PF: I don’t know their story so I can’t really talk much about it. But from an overall perspective, it doesn’t make sense to me.

Me and Patricio fought every single day most of our lives, but if we were to do it professionally, it’d need to involve a lot of money and a very good reason!

During the time that Kimbo Slice was fighting at Bellator were you able to meet him? What memories, if any, can you share with us?

PF: I don’t think I did, just Patricio. But I was a fan of his ever since the YouTube videos.

Assuming that you come out of your title fight with Chandler victorious and uninjured, when would you like your first title defense to take place?

PF: The following week, as long as I’m injury free. I’m good to fight any day.

How are you planning to celebrate your title when you return home to Brazil?

PF: I’ll have a barbecue with my family and teammates. There’ll be a lot of eating and a bit of drinking too (laughs). 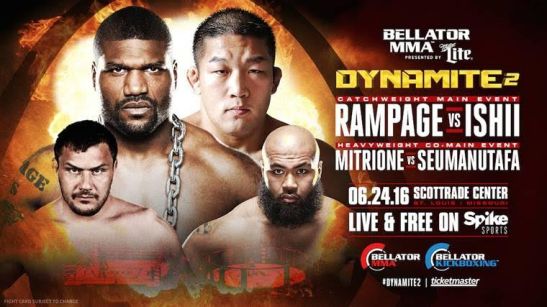 If you enjoy Patricky’s fight you can use Tip A Fighter to show your appreciation.